On January, 19, 1985 the two geologists Horst Peschla and Michael Rochmes founded the „Geotechnische Büro Peschla + Rochmes“ (Geotechnical Office Peschla + Rochmes) in Kaiserslautern. The company collaborated successfully with industry, municipalities, US Armed Forces as well as investors and private clients and therefore grew quickly. In the course of the German reunification the first branch in Oberlungwitz (Saxony) was founded in 1991. 10 years later the branch moved to Chemnitz (Office Saxony) where it can still be found today.

As the result of growing employee numbers the main office had also to be relocated to a bigger building. The just developed industrial area Nordost (Northeast) offered ideal conditions for constructing a new office building. Thus, in September 1992 the Hertelsbrunnenring 7 was completed and taken into service.

In the course of converting the company from a civil law to a limited liability company the “Geotechnical Office Peschla + Rochmes” became todays “Peschla + Rochmes GmbH” (P+R).

The constant development of the enterprise in regard to offered services ensured the continued existence even in difficult economic times and provided the baseline for opening other branches in Lüneburg (Office North, 1990 until 2015), Homburg (Office Saar-Pfalz), Munich (Office South, 2011 until 2017) and the latest addition is the branch in Viernheim (Office Rhine-Neckar) that was opened in July 2017. Our network of branches ensures that we can offer our services to customers throughout Germany.

In 2014 the „Process for the Future“ was initiated by Horst Peschla and Michael Rochmes. “We think ahead”…this also applies to the company succession. We have been able to fill the management from among our own ranks with Tina Steuerwald, who is the daughter of Horst Peschla and the former head of controlling as well as Dipl.-Ing. Michael Drees, who is a longstanding employee and the manager of the division environment. Since 1 November 2015 Tina Steuerwald is also managing director and Michael Drees also works as authorized representative . The founders of the company Horst Peschla and Michael Rochmes who have been the sole managing directors until now remain in the company as managing partners.

Today, more than 30 years after the foundation, our company has 50 employees and offers outstanding consulting and planning services in the sectors civil engineering, waste, environment energy, information management as well as environmental and management consulting. We work on a national and international basis. Our customers comprise municipalities, producing industries, international industrial enterprises and the US Armed Forces. 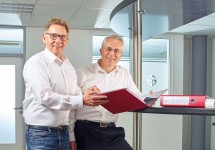